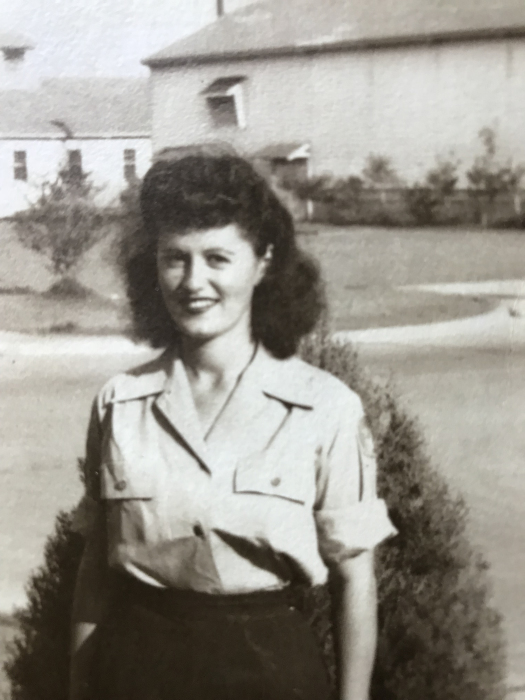 Gerry was born in Ferndale, California to Manuel Mendes-Ferreira and Maria Candida Rocha de Sousa Mendes-Ferreira on April 25, 1921 following their arrival from the island of Terceira in the Azores.

She was a veteran of World War II, proudly serving in the Women’s Army Air Corps (WAAC) from March 14, 1944 until her honorable discharge on December 9, 1945.

With her husband, Colonel Donald Edward Ewing (ret USAF), she traveled the world but always called Ferndale “my home”. They spent their retirement years in his hometown of Galesburg, Illinois, playing golf, bowling, gardening, and enjoying annual cruises on the high seas.

She is survived by her daughters Priscilla (David Torchin) Ewing of Ramsey, New Jersey and Timya (Duane) Owen of Woodbury, Minnesota, her grandson Hunter Torchin, her sister Velma (Bruce) Tirsbeck, and many nieces, nephews, and loving friends.

She was preceded in death by her parents, her stepfather Joaquin Sousa Nunes, her brothers Joseph, Manuel, and Daniel (Shirley) Nunes, her sister Lavina (Tony) Collenberg, her ex-husband Aldo Joseph Trutalli (of whom she spoke highly), and her beloved husband Donald Edward Ewing.

Her family and friends wish to express their immense gratitude to the caregivers at Betty’s Harbor Memory Care, New Perspective Senior Living, and the staff and volunteers of St. Croix Hospice. As per Gerry’s wishes, there will be no funeral. A celebration of her life will be held this summer in Inverness Village, Inver Grove Heights, Minnesota.

To order memorial trees or send flowers to the family in memory of Geraldine Ewing, please visit our flower store.