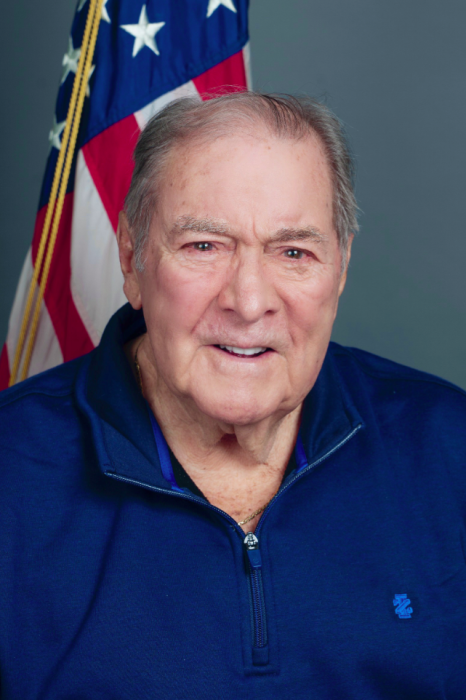 Born November 2, 1931, Bob set sail for eternal life on April 14, 2022. Born and raised in St. Paul, he took great pride in being a Saint Paul Police Officer and played in the Saint Paul Police Band. After his retirement Bob stayed active with the Saint Paul Police Retirees until his death. A huge Minnesota Vikings fan, Bob ran his first bus trip to Green Bay to see the Vikings play the Packers in 1961, and so Hillcrest Sportsman’s Club was formed. Hillcrest Sportsman’s Club thrived with the help of Dolly Plaster, becoming the largest travel club in the Midwest for several decades, chartering flights to destinations around the world for its thousands of members.

Bob was an avid sailor, scuba diver, and skier, enjoying many wonderful adventures through the years, with his partner and best friend in life, Sandy Yule. Sandy and Bob traveled often, including yearly ski trips to Aspen. Bob co-founded the Phantom Reef Divers, taking scuba diving vacations throughout the Caribbean, Mexico, and the Great Barrier Reef.

An avid sailor, Bob sailed the Caribbean, the Great Lakes, and made his second home on his sailboat, the Columba, on Lake Pepin in Lake City. He was Commodore of the Lake City Yacht Club for two years, a position he both loved and excelled at, making lifelong friends with the Lake City sailing family.

Bob was exceptionally proud of his 4 daughters and taught them the values of personal responsibility and common sense. He and Dolly took the girls on adventures all over the world, instilling in them compassion, kindness, and a love of all people from every culture. In his later years, he loved spending time with them and his grandchildren sharing stories of his life.

For the last several years as Bob declined in health, Sandy took care of his every need. The daughters believe their dad’s quality of life and longevity is due to the love and care of Sandy. Our gratitude also goes to the caring staff of Cerenity Marian and Our Lady of Peace Hospice for the last few weeks of his life.

Bob is preceded in death by his father Ray Plaster and his mother Marie Walsh. He leaves behind his beloved Sandy Yule; his 4 daughters Rae Plaster, Vicki (Joseph) Kueppers, Shelley (Bob) Jwanouskos, and Wendy Plaster; grandchildren Andrew, Robert, Christian, Kathryn, Mariel, Jackson, Cooper; sisters Audrey McDonald, Kathleen Marie and several nieces and nephews, and many close friends. Mass of Christian burial will be held by the family on Friday, April 29, at 11:00 a.m. at the Church of St. Joseph in West St. Paul with visitation 1 hour prior.

To order memorial trees or send flowers to the family in memory of Robert Plaster, please visit our flower store.